It was a golden morning in Spanishtown, Jamaica. The brilliant sunshine and rapturous birdsong erased any memories of the dull winter my friend Jodie Godwin and I had left behind in Niagara. We were enjoying our stay at the home of Uton and Linnette Bell, good friends we had met through the Caribbean workers church service back home. It was 2008, my second time visiting friends I had met in the neighbourhood back home and Jodie’s first visit experience touring the island.

Mr. Bell came to Canada originally through the farm work program in 1968, moving here permanently in 1973 with his young family after being sponsored by Abe Epp. Although he has called Niagara home for the past 47 years, he looks forward to spending a few months in Jamaica each year.

We enjoyed a hearty breakfast of roast breadfruit and fresh oranges then headed out to the mountains to visit friends who worked on neighbouring farms back home. The drive started off winding through the countryside with Uton at the wheel and his wife Linnette filling in the details while he pointed out places of interest.

Stops were spontaneous and frequent. Every few minutes we would honk at a front gate and someone employed at a Niagara farm would appear at their door, a mix of joy and surprise on their faces.

Earl “Earlybee” Newell, a long time employee at Epp farms and our keyboard player at the Caribbean workers church service back home was the first stop. He enthusiastically gathered family members to make introductions. Clive Brown from Hunter farms, Checko from Epps, Errol, Johnny –   after hugs, laughter and weather updates from back home we would drive on to the next house, to be repeated numerous times as we gradually wound our way up the mountain.

Verdant fields of sugar cane and yam gradually yielded to rocky outcrops and feathery stands of bamboo gracing the roadway. Stops were less frequent as the road narrowed and the incline increased. Our journey slowed to a crawl as Uton navigated the many potholes and washouts.

It was a marvel to view the terraced fields of carrots across the valley somehow carved by hand from the steep terrain. No four wheel drives could navigate those slopes, only sure footed donkeys laden with sacks of tools could pick their way along the jagged paths.

We were headed to a setup in Kentish, a small village perched on one of the highest peaks in the parish of St. Catherine. A setup is a large gathering of friends and family honouring the passing of a loved one. It takes place usually at the home of the deceased every day of the week leading up to the funeral. Often the funeral will be delayed as long as two to three weeks to allow family members to return home from the United Kingdom, the States or Canada. It is one of the most significant events for the entire community as they come together to mourn and support each other during their time of bereavement.

As the journey progressed, I was no longer enjoying the view. My foot was firmly jammed down on an imaginary brake pedal and I kept my eyes focussed on the brush scraping the car against the face of the cliff. I was relieved to have reached the summit when Uton pointed out a distant ridge with little specks moving about on the crest.

The road had narrowed to that of a rutted path.

“Uton, have you driven here before?” I could no longer contain my dismay.

“Never,” we could barely hear him say over the blaring radio, “ it’s a bad stretch of road.”

“Only on foot” chimed in Linnette.

Jodie groans, eyes wide, as we inched along towards the ridge, cautiously passing people who seemed casually unaware of the imminent danger.

Dark clouds scudded by alternating with patches of brilliant sunshine. A brief torrential cloudburst caused multicoloured umbrellas to pop open up ahead and I was sure the strong gusts would send them aloft Mary Poppins style.

Once on the ridge, the precipice dropped down on both sides and Uton hunched over, gripping the wheel as he navigated every little bump and rut along the final stretch.

I refused to open my eyes until we finally reached a relatively level area that widened out into a field of sugar cane. Over a hundred people milled about in small groups with a few donkeys tied up on the fringes, grazing on young shoots of cane. 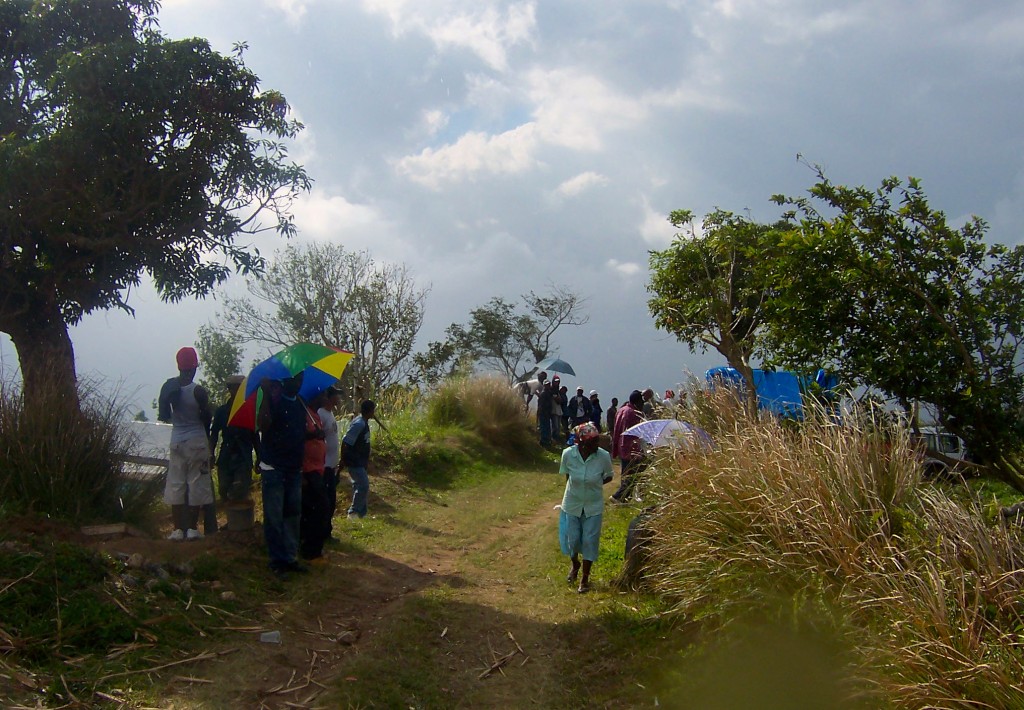 I slid weak-kneed out of the SUV taking a few minutes to steady myself while Uton and Linnette jumped out to greet old friends. Jodie and I started to follow but were quickly intercepted by curious locals, who welcomed us warmly. It became obvious that Uton ( Sonny as he was known here ) and Linette were well loved in the community.

Men and women alike hustled around steaming pots simmering over coals in the yard of a sturdy turquoise bungalow. The tantalizing aroma of fresh pimento and jerk chicken wafted over the visitors who were arriving steadily on foot, in vehicles and sure footed mules.

Uton introduced me to men who worked on the farms back in Niagara. It felt strange to meet people who were my neighbours eight months of the year on this distant mountaintop a world away.

They guided me through the crowd and we headed through the cane field and beyond with William Rhule, also retired from Epps farm. 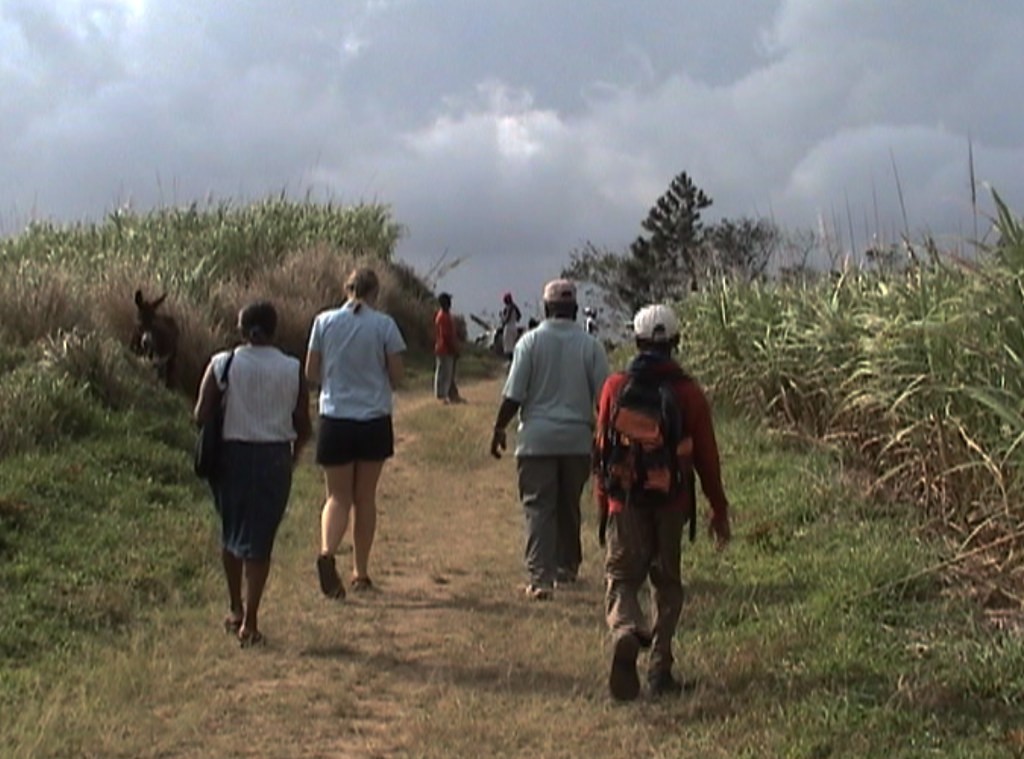 Jodie was quickly off exploring, barely visible in the distance where the far end of the ridge descended into the mist.

The wind was relentless, the air felt super oxygenated and energizing. Brilliant rainbows appeared, stretching between mountain ranges after every cloudburst.

Forgetting my fear of heights completely, I caught up to Jodie where she had befriended a few contented cows.

She threw her arms open during a few wild gusts as if to start soaring and sharing our sentiments shouted “I’m on top of the world!”

The following night we had the privilege of joining in on the final night of the setup at another family member’s home. Uton parked by an overlook that offered a spectacular panoramic view of city lights shimmering over a distance of 30 miles.

A group of young boys came over and insisted we take their hands to guide us to the house a good distance away. We were grateful for their assistance as it was impossible to see our way in the inpenetrable dark. Due to the recent downpours the path was extremely slippery. We had no idea how treacherous it was until the foliage parted and the boys pointed out the tiny lights of a village straight down.

Off in the distance we could hear the sounds of the nine-night band warming up, the crack of the snare echoing off of the nearby mountain face. The warm glow of single bulbs strung from tree to tree illuminated the yard jammed with people coming to pay their respects and avail themselves of liberal amounts of Worthy Park rum.

The band was set up under a loosely configured tent. Impatient for the guitars to finish tuning, the vocalists let loose into their microphones. It quickly became obvious they were not singing in the same key but after a few minutes and a swig or two from a nearby bottle they settled into a lively groove. It took awhile before I recognized the songs as more animated versions of old hymns. Nine-night bands that provide the music at setups are prepared to play until the break of dawn, typically starting off with hymns and gospel choruses and evolving into reggae and popular music as the night progresses.

People were friendly and definitely curious but conversations dwindled once the music took off. The drummers alternated every few songs allowing a young boy of about twelve to display his exceptional talents. Later an elderly gentleman shuffled into the circle of musicians, coaxing some lively tunes from an ancient saxophone. Tambourines, pot lids, graters rounded out the percussion section as they repeated the choruses over and over, the entire crowd singing along.

Young and old joined in on the dance floor, the senior dancers enjoying center stage.

After a few songs, there seemed to be a commotion on the far side of the crowd . A Canadian visitor was dancing energetically in her own unique style, oblivious to the attention of onlookers.

An elderly gentleman beside me observed Jodie, then looked at me quizzically.                                    “She learned to dance like that in Africa” I offered and he laughed. It was Jodie’s first trip on the island. Wherever we travelled she made herself right at home, investing herself 110% in whatever activity we were engaged in. Tonight was no different.

Walking back along the path a few hours later we felt the presence of a million stars spinning out into the galaxy overhead. There was so much to reflect on after the day’s events.

I began to appreciate how painful it would be to experience the loss of a loved one while working almost three thousand miles from home. I cannot even imagine the struggle to keep the pain to oneself without the support of a community or the ability to participate in the traditions that are vitally important to one’s well being.

Some of our neighbours working on Niagara farms are able to fly home to take part in family funerals and others are not so fortunate. Financial responsibilities and often the need to pay off crushing hospital bills and subsequent funeral costs requires that they remain on the job.

It has been my experience so many times over the last 14 years to simply “hold space” and listen to someone pour out their grief in a peach orchard or a picnic table or even the grocery store. Showing up, taking them out for a quiet meal away from the noise of the bunk house – there are so many ways to let them know they are not alone and that our community cares.

In August 2019 two locals responded to concerns about Zenaida’s coworkers after she passed away from the tragic hit and run accident. Fran Boot and Betty Knight invited the five women out to enjoy a beautifully spread picnic table one summer evening at Queens Royal Park followed by a walk in the old town. A unique story of friendship has unfolded in the past five months and the delightful memories they’ve created together are a blessing not just for the participants but family members back in Mexico.

Last summer a Jamaican man working on a local farm approached me rather tentatively and asked if I had ever been to a setup in Kentish. When I replied in the affirmative he laughed so hard and said that he would never forget the night that Canadian lady was dancing. I believe he wasn’t the only one!